Is "Exit Through the Gift Shop" just another Banksy prank?

“I don’t know why so many people have been fooled into thinking this film is fake,” Banksy, or someone purporting to be he, wrote in an e-mail message from Los Angeles, where the film had a premiere on Monday night. “It’s a true story from real footage. Does it bother me people don’t believe it? I could never have written a script this funny.”

Is the joke on US?
Posted by Kim Hong at 8:02 PM No comments: Links to this post 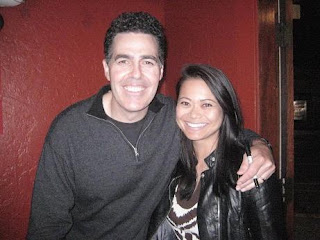 Adam Carolla performed at Cobb's Comedy Club in San Francisco last night.
After Adam Carolla's radio show was canceled in February 2009, he began podcasting, which has been quite a huge success in the podcast arena.

According to Wikipedia, during its debut week, the Adam Carolla podcast recorded 1.6 million downloads and 2.4 million downloads in its second week. By the third podcast it was the number one podcast on iTunes in both the U.S. and Canada. Just goes to show the loyalty of his fans and what they are willing to do to listen to his comedic rants. His podcasts consists of interviews with writers, comedians, successful entrepreneurs and celebrities from A-Z lists (my favorite being the dreamy Alec Baldwin). He also interjects self-deprecating humor and complains about pretty much everything and anything. What started off as an experiment in new media has developed and expanded into a huge success, while capturing an extremely loyal and dedicated fan base.

In an effort to make some sort of income, Adam started touring and doing LIVE shows, which is why the guys and I decided to check out his show at Cobb's Comedy Club in San Francisco to show our support. Adam did three back-to-back shows, which left him pretty exhausted by the third set, understandably so. He kicked off the set with his signature bit, What can't Adam complain about?, and continued with a clip from The Man Show and a surprise appearance from Steve Wozniak, one of Apple's co-founders, who just happened to be sitting in the crowd. All-in-all, the show was great and we remain loyal fans and wish him and his team the best of luck in this venture. 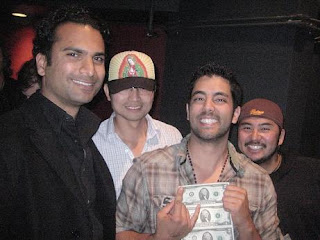 If you're pursuing a creative job with a top advertising agency, you can pretty much expect the competition to be tough. Check out how Alec Brownstein executed a clever job experiment, which resulted in four job interviews (David Droga, Gerry Graf, Ian Reichenthal, and Scott Vitrone) and two job offers! He is now a Senior Copywriter at Young & Rubicam New York. Check out his video entailing how he pulled off his Google Job Experiment below:

Posted by Kim Hong at 1:18 PM No comments: Links to this post

At last, my housemate (Juan) and I finished unloading and unpacking our boxes into our new spacious apartment in San Francisco. We arranged the little furniture we did have in each of the rooms and our place slowly started to come together, making it feel more and more like home.

Unfortunately, a few nights ago while placing a pizza order over the phone, Juan haphazardly "confused" our dining room table for a chair and sat on it! The table immediately broke into two pieces causing for his Buddha sculpture from Z Gallerie to slide off the table and crash onto the floor, shattering the sculpture into several pieces. Oy vey!!! Although the sculpture is inexpensive, it contained sentimental value for Juan. The Buddha bust complemented the dining room motif and everyone loved it. 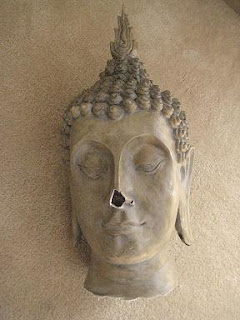 Of course, we were both quite upset to find his Buddha sculpture damaged because it was one of his most prized decorative home accessories. However, as he started to gather the pieces together, he discovered an unusual sculpture hidden within the base of the Buddha bust (see below). What a strange figure! It appears to be an elf riding on a donkey? The person who crafted this sculpture had an interesting sense of humor...or simply had a peculiar way of entertaining themselves. 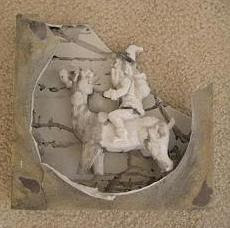 An elf sitting sitting on a donkey?
Among Juan's other favorite home accessories include... 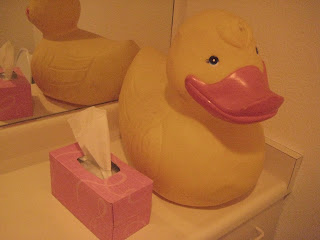 (Note: a tissue box is placed for size reference)
...an over-sized rubber duck and... 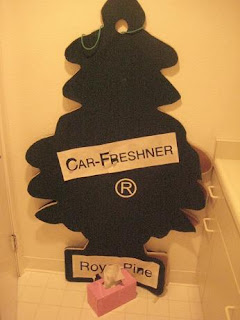 (Note: a tissue box is placed for size reference)
an over-sized Little Trees (R) Car Freshner.
Looks like we will be hitting up some home furnishing stores this weekend in search of a new Buddha bust!
Posted by Kim Hong at 6:44 PM No comments: Links to this post

Despite the ridiculous immigration law that was recently passed by the governing idiots in Arizona, I will be celebrating Cinco de Mayo today with friends and the Latino community to show support against Arizona's new immigration law. The new law disregards our basic principles of equal rights and sanctions racial profiling.

I will be joining some friends at the Fox Theater in Oakland where Julieta Venegas, a beautiful and talented Mexican singer/songwriter, will be performing tonight. Check out her music video below:

Below is a hilarious performance by George Lopez, an American comedian/actor, that ridicules Arizona's new immigration law. (Paula - thanks for posting on Facebook!)

To show your support against Arizona's new immigration law, join this Facebook Group and learn more about what you can do. 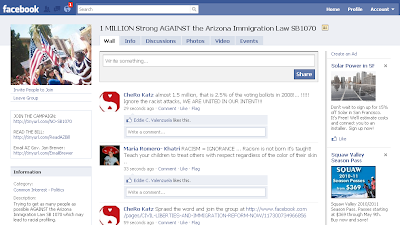 You can also embed this widget on your blog/website.
Visit http://www.change.org/petitions/view/legalize_arizona and grab the embed code!
Posted by Kim Hong at 1:16 PM No comments: Links to this post