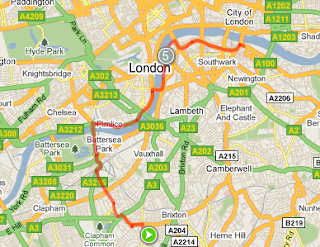 Out of pure fear, I forced myself to get my butt into gear for the San Diego Marathon after realizing that the race was only 3 months away!
I thought it would be a fun idea to see London via a nice sloooow jog today, so I used MapMyRun.com to create a scenic route and calculated the distance traveled (6.76 miles/10.89km).
I snapped some photos throughout my run to showcase some of London's attractions and gorgeous weather, which is a rarity in London. 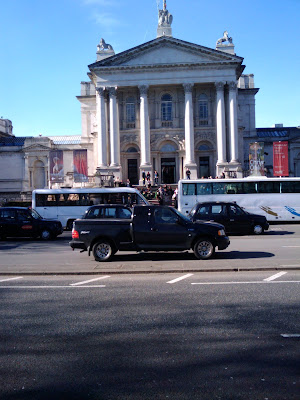 I started in Clapham and headed to Battersea Park. After crossing Chelsea Bridge, I came across Tate Britain (pictured above), which is currently exhibiting 150 pieces of Henry Moore's stone sculptures, wood carvings, bronzes and drawings. And to top it off, Chris Ofili's paintings are also being showcased at Tate Britain until May 16 - this is definitely something on my to-do list! His multi-layered paintings are best known their innovative use of media, including lumps of elephant dung, glitter, resin, map pins and magazine cut-outs - Yes, I said elephant dung (feces - poop)!!! He used to bring elephant dung from his trips to Zimbabwe, but now he gets it from the London Zoo. Ofili also won the £20,000 Turner Prize in 1998. 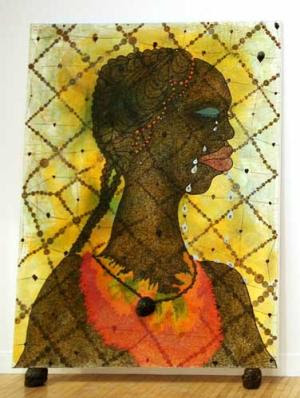 Description captured from the display caption at Tate Britain:  No Woman No Cry is a tribute to the London teenager Stephen Lawrence. The Metropolitan police investigation into his racially motivated murder was mishandled, and a subsequent inquiry described the police force as institutionally racist. In each of the tears shed by the woman in the painting is a collaged image of Stephen Lawrence’s face, while the words ‘R.I.P. Stephen Lawrence’ are just discernible beneath the layers of paint. Despite these specific references, the artist also intended the painting to be read in more general terms, as a universal portrayal of melancholy and grief. 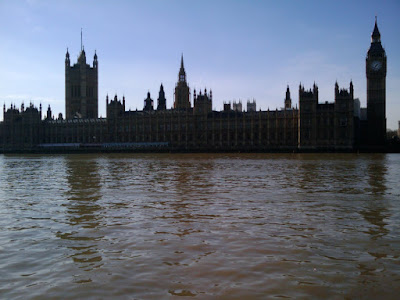 Next on my route was the Houses of Parliament, home to Big Ben and Victoria Tower. 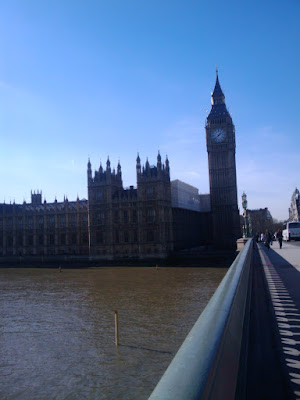 Big Ben doesn't actually refer to the clock-tower itself, but rather to the thirteen ton bell hung within. The bell was named after the first commissioner of works, Sir Benjamin Hall. 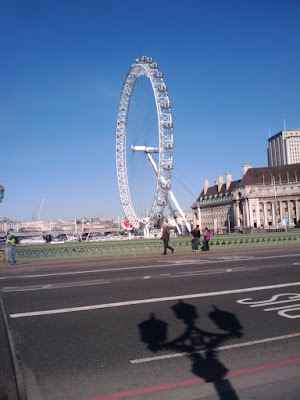 Last, but not least, I snapped a photo of the London Eye, the largest Ferris wheel in Europe. As you can imagine, it was packed with tourists. I managed to dodge most of the tourists, but won't make that mistake again in the future.
I highly recommend this route for runners in London, but suggest leaving early in the morning to avoid the high tourist traffic.
Once my calves fully recover, I'll map my next route to include Hamstead Heath or Richmond Park, two of my favorite parks in London!
Posted by Kim Hong at 9:16 AM