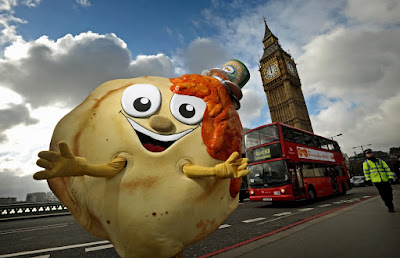 Pancake Man makes his first appearance in London on Pancake Day 2010!
Thanks to one of my lovely clients, Lyle's Golden Syrup, I received all the mixings to help me prepare for my very first Pancake Day in England! Since Pancake Day tends to sneak up on most Brits, Tate and Lyle decided to unleash Pancake Man to help remind Londoners to pick up pancake ingredients and toppings at their local supermarket so that they can properly celebrate their final day of indulgence.

My lovely housemate, Gareth, graciously offered to make us pancakes in honour of this special occasion - what a generous mate! But then again, now that I've given it some more thought, I'm starting to think it was his clever plan to keep me away from the kitchen! Doh, I'm so naïve! But then on the other hand, I don't blame him though...I did almost burn down Nick's flat last year...*sigh*

Gareth was kind enough to let me film him flip a pancake so that I could participate in CafeBebe's Flip-tastic Pancake Day Carnival.

So here is our Flip-tastic Pancake Day video! Check it out and let me know if his technique is any good. By the way, although I wasn't involved in any of the actual cooking, guess how I burned my bloody fingers! I'm starting to feel like I'm prone to accidents.

We made both American pancakes and traditional English pancakes, which look more like crepes to me. What a day full of #pancakefun! 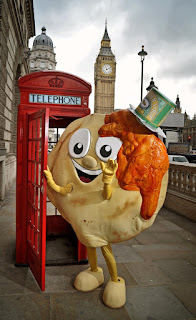 Have you seen Pancake Man lately? 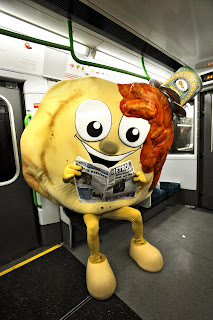