Chinese New Year in London - Year of the Tiger


I was lucky enough to catch a glimpse of this Lion Dance in Chinatown (London) today. Many festive performances took place throughout London within the last two weeks to celebrate Chinese New Year ("Year of the Tiger").

The Chinese believe that if business owners "feed" the lion with red envelopes (Ang Pao) filled with lucky money, the lion will chase away evil spirits and bring good fortune and prosperity to the business the upcoming year. My parents were always superstitious people, so when they opened up their first business, they made sure to invite the Lion Dancers to bring prosperity to the business.

There's just something about the drum beats during the dance that brings me back to (somewhat) fond childhood memories. I was always excited to watch Lion Dance performances at local Chinese/Vietnamese supermarkets during Chinese New Year, but as soon as the Lion's long lashes fluttered near me, I suddenly became frightened and quickly hid behind my father. There's just something really creepy about the Lion's eyelashes... 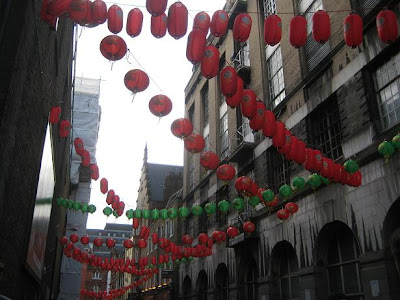 Chinatown is filled with lanterns. 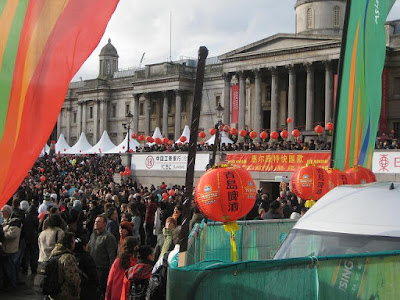 Trafalgar Square hosted many traditional Chinese performances.
I'm suddenly in the mood for Dim Sum, but to be completely honest, the Chinese food in London doesn't compare to the Chinatowns in New York, San Francisco and Los Angeles. 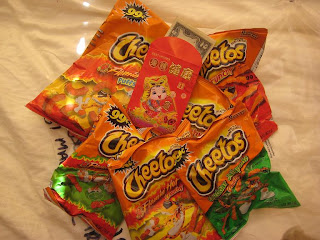 My best friend thought it was a clever idea to send me bags of my favorite chips from the States, Cheetos, in honor of it being the "Year of the Tiger". Unfortunately, Chester is not a tiger, he's a cheetah! Nevertheless, I managed to enjoy the Cheetos and undoubtedly appreciated the kind gesture. Thanks Juan! xx

Fabulous images. For the first time ever I have read a blog post, picked up a pen and paper and made notes. That might sound odd so I'll quickly explain - my sister in law is Chinese (and my 18 month old niece is half-Chinese) so Chinese culture is something my family have a keen interest in now. So I'm noting down how to say happy new year correctly - for next year, I'm a little late this year.

My bother is a tiger and apparently he will be wearing red socks for a whole year. That's something I need to look into further! Small world isn't it? Who would have thought we would have that connection. My brother worked in Beijing for three years and that's where they met. They celebrated Chinese New year in Manchester this year where there is a thriving Chinese community. Anyway, I'm waffling slightly now!