During a delightful Thanksgiving dinner in London with a few Americans, an interesting conversation about "Sinterklaas" emerged from the host's recent trip to the Netherlands. As you can probably conclude, Sinterklaas is the basis for the North American figure of Santa Claus. There are some differences between Sinterklaas and Santa Claus (you can read about them here), but the one difference that piqued my interest was Sinterklaas' helpers, they're definitely not elves! 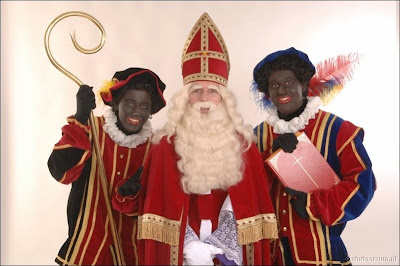 I was astounded to learn about Sinterklaass' helping hands, Black Petes. Black Petes are the men with black-painted faces wearing joker costumes that accompany Sinterklaas. According to Wikipedia, three small Moorish boys were sentenced to death for a crime they did not commit, and Sinterklaas intervened to help save them. To show their gratitude, the boys stayed with Sinterklaas to help him, tumbling and jumping on rooftops on Sinterklaas night to deliver presents. Their black skin may refer either to their Moorish background, or to the job of chimneysweep, an option is corroborated by their clothes, reminiscent of an Italian chimneysweep's costume and Pete's rooftop occupation. Another background story for Pete is that he is the devil who was enslaved by Sinterklaas. (Wikipedia)

Are Americans obsessed with being politically correct, or is this just flat out racist?

Black Dutch nationals have in recent years frequently criticized as racist the practice of having a white person in blackface portray a caricature of a 17th-century African slave. But, so far, the Dutch have vehemently rejected this and refused to change any aspect of the celebration, arguing that Black Pete is black simply because he climbs through chimneys.

If you haven't read this, you should: http://davidsedaris.net/blog/?tag=david-sedaris-6-to-8-black-men (this is the audio version)

I was in Amsterdam a few years back when they had the parade through the city with all the Black Peters. Every single person in the parade was white, with black make-up. Likewise the entire crowd was white European.

I'm not sure that it's intentionally racist, it's a historical tradition. But black Dutch people sure as hell don't go anywhere near it!