This must be THE year of weddings and engagements for my family and friends, which is wonderful because what that means is that people dearest to me have found love once and for all.

Earlier this year, when I received the call from my cousin T announcing her engagement, the hairs on my arms rose followed by a million questions streaming out of my mouth! How did he propose? Did you know he was going to propose? What did your parents say? When is the wedding? Where is the wedding? Will it be a traditional Vietnamese wedding? Do my parents know? Can I tell them? I don't think I even gave her the opportunity to respond before bombarding her with all these questions.

After she downloaded me on all the juicy details, she then asked me to be apart of her bridal squad. I was truly honoured and immediately accepted the privilege to be apart of her special day. The wedding date was set for Saturday, September 19, 2009 in Portland, Oregon.

Nine months later, upon my arrival in Portland, the bridal party put me to work the moment I set foot in Oregon. Although feeling a bit jet-lagged, I enjoyed every second spent preparing for cousin T's traditional Vietnamese wedding. It was quite intense; preparations ranged from assembly of 100 hand-crafted boutonnieres to seating arrangements for 350 guests! 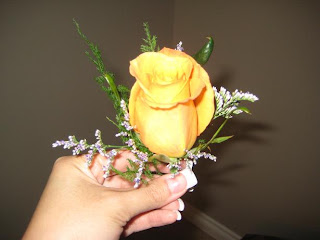 After hand-crafting 100 boutonnieres,
some of us had to get our french manicures fixed.

The big day approached quickly. The night before the wedding, the bridal squad stayed up until 2am working out the seating arrangements and were awoken two hours later (4:30am) after the hair and makeup artist rang the doorbell, which set off loud repetitive barks from "Hennessy," the dog, followed by a musical chime from someone's mobile alarm. What a great way to start the day! 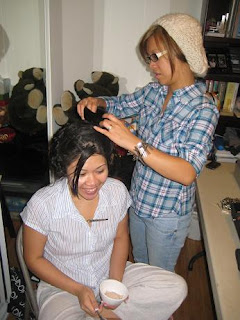 We were all desperate for a dose of caffeine
- understandably so! 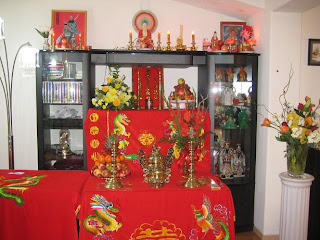 In front of this decorated alter is where the tea ceremony took place. 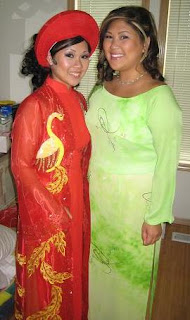 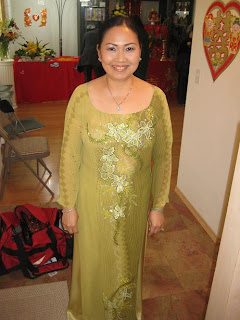 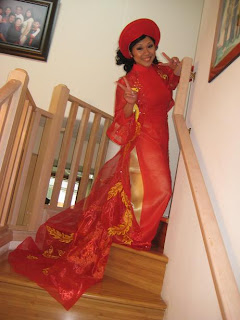 Modern times do not require 'asking permission' to receive the bride. Originally, this activity was only done to confirm that the marriage would in fact take place. In the olden days, marriages were often forced and arranged, which funnily enough resulted in brides fleeing the scene! 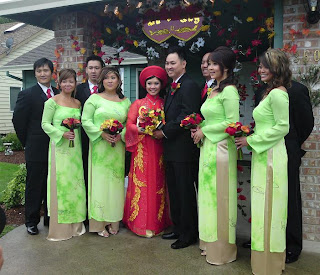 The reception was held at Doubletree Hotel where a seven-course meal (Chinese and Vietnamese dishes) was prepared and served. Traditionally, the reception is held at a Vietnamese/Chinese restaurant, but cousin T and hubby wanted to shake things up a bit and added a Western touch with an American venue. 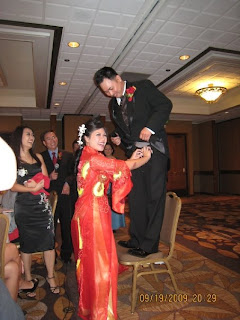 My favorite game! The bride had to insert a raw egg into the bottom
of groom's pant leg and carefully maneuver it to the top and across to the bottom of other pant leg.

While guests were chowing down, the wedding party and parents of the groom and bride 'walked the tables,' which was my favourite activity conducted throughout the entire day. We approached each table one-by-one so that the parents could thank the guests for coming. Guests share a few words and offered the bride and groom their wedding gift, red envelopes decorated with lucky symbols filled with money. However, some guests requested for the groom and bride to play a fun game before receiving their gift, i.e. blindfolding the bride and asking her to select which bum belonged to her husband. We had 35 tables to thank and my feet were killing me after being in heels all day, but it was definitely worth it to witness the playful activities that guests asked the newlyweds to play. If they wanted the gift, they couldn't refuse the game.

Five dresses later, the wedding came to an end! What a beautiful and spectacular day with family and friends to celebrate the union of two, young, devoted friends who share an unconditional love for one another!

Congratulations Mr. and Mrs. Doung!!! On behalf of my family, we wish you many, many years of joy and happiness. 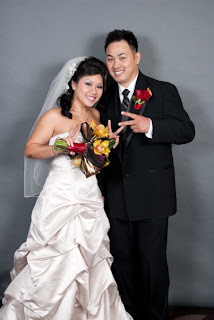 "The more you invest in a marriage, the more valuable it becomes."
~Amy Grant

team duong's day could NOT have been said any better for anyone that missed the wedding itself to understand all that went on that hectic but memorable day... beautifully written miss kim! thanks for sharing our day with everyone!

Those dresses are absolutely gorgeous!