In the video above, we're about to experience the world's first vertical drop roller coaster, Oblivion at 110kph!!!

For my "Forever 21" birthday, we went to Alton Towers, UK's largest theme park located in Staffordshire. Loads of fun, but does not hold a candle to Six Flags (Magic Mountain), California!

Thanks to everyone's warm birthday wishes via Facebook, Twitter, email and traditional birthday cards yesterday! It meant a lot to me and brought a ginormous smile on my face throughout the day. Your kind gestures have touched my heart and made me feel all warm and fuzzy inside :)
Posted by Kim Hong at 2:15 PM 2 comments: Links to this post

My Little Brother is Going to be a Dad!

Well, he's actually not so little anymore but you know what I mean. Who would have thought that my mischievous middle brother, David (pictured below), would be the first to start a family? 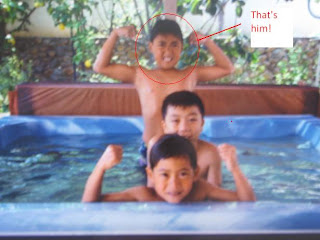 As you can imagine (btw - that's him in the back flexing), he was a huge fan of WWF (World Wresting Federation) - renamed WWE in 2002 - and he loved WrestleMania's Jake "The Snake" Roberts, Andre the Giant, and Hulk Hogan, among many other golden age wrestlers. Nobody dared to mess with his figurines unless they were prepared to be put in a headlock or worse, a DDT. It's pretty safe to say my Barbie dolls never got mixed up with his precious WWF figurines!

And now, he's all grown up and preparing to start a family with the lovely Rosario. Where did all the time go? 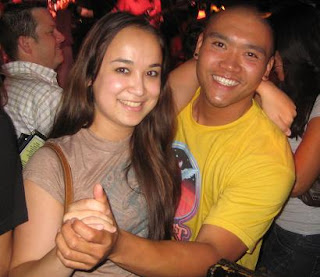 Rosario and David visited me in New York last year.

David appeared in a local TV spot for Frank Hyundai thanks to Juanito.

After visiting the doctor for an ultrasound, they found out the sex of the baby! It's a BOY and everything appears to be okay! 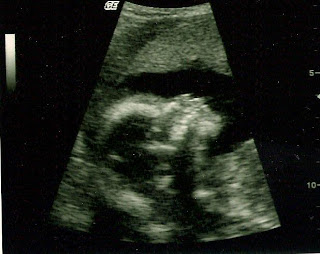 The sonogram shows the baby's head... 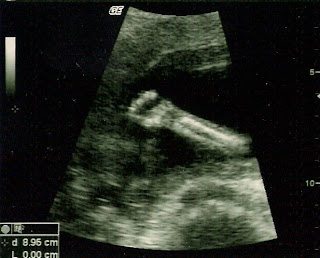 and hand...
I made a few suggestions for the baby's name, but my ideas were turned down for not sounding ethnic enough (*sigh*). I've always believed that a child's name had the potential to influence the development of the child's personality and future.

Attending school in America with an ethnic name was no walk in the park for me. I hated my Chinese name growing up and wondered why my parents couldn't just pick a normal name for me. My teachers and classmates could never pronounce or spell my name, leading me to pick a more "American" sounding name, hence "Kim."

After adolescence, I eventually gained confidence and pride in my family's heritage and culture, so I reverted to using my birth name. I love my Chinese name, but it's not an easy name to use in English-speaking countries. I struggled and fought to keep it for as long as I could, but after three years of missed opportunities due to senders receiving bounceback emails and error messages, mispelled accounts and certificates, and people simply not being able to easily remember my name, I decided to go with my American name once again!

Boy, did I go off on a tangent there! Now...back to what I was saying. On behalf of everyone who knows David and Rosario, we are confident that you will make exceptional parents and the children you bring into this world are lucky to have parents who will lavish them with unconditional love and dedication. 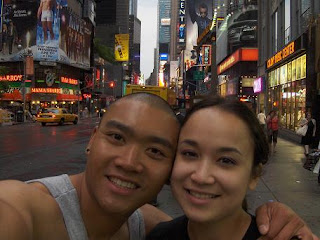 "In bringing up children, spend on them half as much money and twice as much time." ~Author Unknown
Posted by Kim Hong at 5:37 AM 1 comment: Links to this post 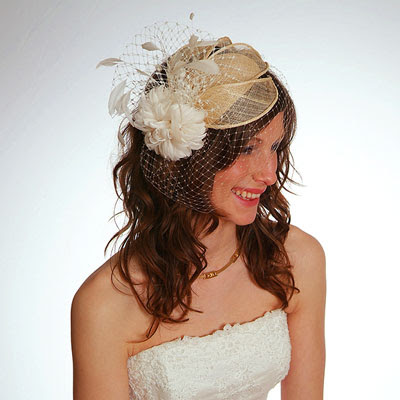 When I RSVP'd for my very first English wedding, I thought it would be fun to shop for a fastenator, (also spelled fastenater) a small headpiece usually mounted on a base, comb or headband worn jauntily to the front or side incorporating a combination of feathers, flowers, coils, curls and other trimmings.

After visiting a few couture shops in Covent Garden, I decided to give it a pass. I couldn't find one that suited me and I didn't quite feel posh enough to pull it off. 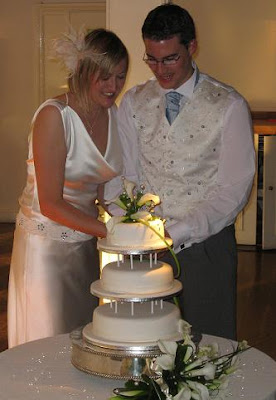 However, the lovely bride (Helen) certainly pulled it off with her simple, yet elegant fastenator. Helen's other half (Ross) also strutted around in a beautifully embroidered silk vest. The duo graced St Mary's Church in Hampton with a whole lot of class and sophistication.

Before we were seated for dinner at the Ham Polo Club, guests were pleasantly surprised to find seating placecards with each person's photo on them! I can only imagine all the effort that went into searching for photos for each guest (and their significant other), especially since not everyone has a Facebook account. 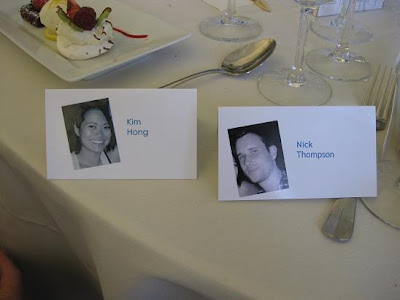 What's on the menu? 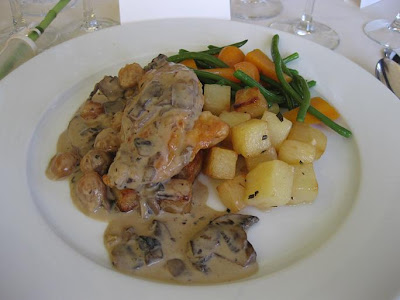 Corn-fed chicken in mushroom sauce with potatoes and veggies 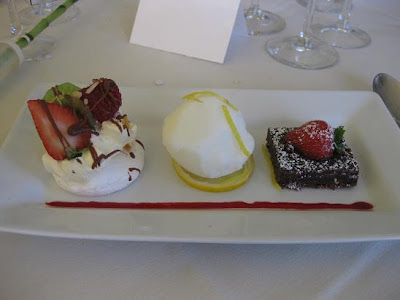 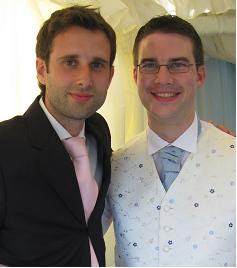 Nick and Ross: University mates
We shared the table with three other couples that had one thing in common: KIDS!!! I somehow got the feeling that Helen and Ross were trying to hint at something! :) 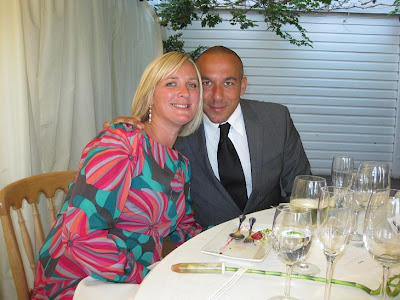 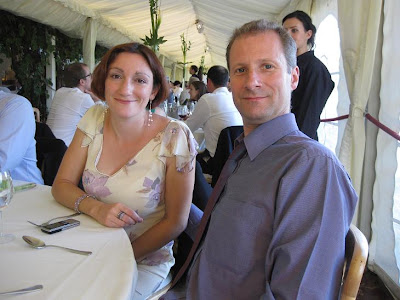 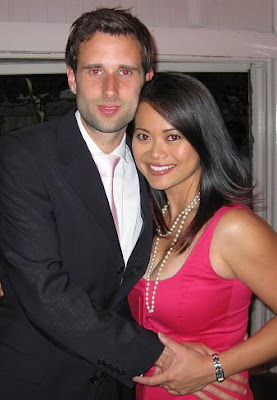 All in all, the wedding was truly amazing! Beautiful weather, stunning bride, good company, flowing taps, tasteful entertainment and exceptional food! What more could a girl ask for? Congratulations Ross and Helen!!!

"Love is a symbol of eternity. It wipes out all sense of time, destroying all memory of a beginning and all fear of an end." - Anonymous