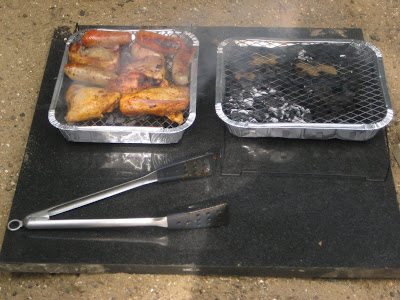 Summer is the perfect season for backyard barbecues...even if you live in London! Instead of investing a couple hundred quid on a top-of-the-line gas barbecue grill, we picked up disposable BBQ's at Tesco for $2.99 (2 for £5).

Hailing from San Diego, disposable barbies are quite foreign to me, but they certainly did the job! I highly recommend it for anyone planning to host a BBQ for up to twelve people.

We bought three disposable barbecues for Nick's mum's birthday today. We prepared enough food to feed eight people and were able to cook four hamburger patties, three steaks, eight pieces of chicken, and twelve sausages on the barbecue before the flames started to die down. 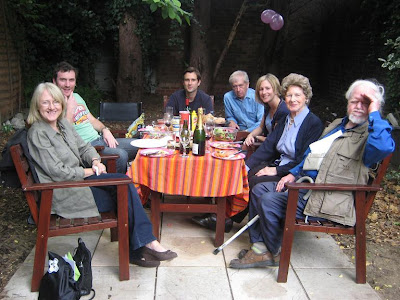 The instant barbies were easy-to-use and required only a lighted match to start cooking for approximately 25 minutes. I guess the only thing you'll have to worry about is the weather. Will it rain or shine? But that's pretty much a coin toss when you live in London. Luckily for us, we had a solid four hours before it started to rain heavily.

Oh, and here's a side note about shopping in the UK: Is it just me or do you feel compelled to buy more than what you intended when you see a "buy 3 for £5" deal? Sometimes I'll just need to pick up a carton of juice on my way home from work, but when I see that I can buy 3 for £5, I end up leaving the store with three cartons!!! I recognize that it is a clever marketing scheme, but fall for it every time -- I'm such a sucker for bargains!
Posted by Kim Hong at 10:10 AM

Disposable bbq's are the best options if you are trekking or traveling and want to have a bonfire with some bbq. Thank you for sharing this with all your readers. I am surely going for it.