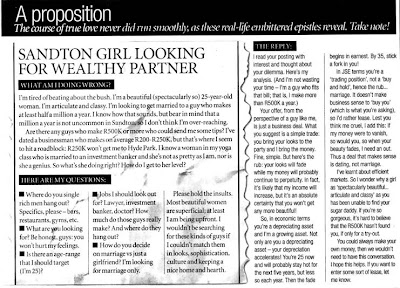 Funny enough, Nicholas forwarded this to me after receiving it from a colleague at work in London today. Can you believe it's still being circulated worldwide?

The scathing response posted by an investment banker (see below) at JPMorgan Chase is what really made the email go viral last year, resulting in national TV and print coverage.

I read your posting with great interest and have thought meaningfully about your dilemma. I offer the following analysis of your predicament. Firstly, I'm not wasting your time, I qualify as a guy who fits your bill; that is I make more than $500K per year. That said here's how I see it.

Your offer, from the prospective of a guy like me, is plain and simple a crappy business deal. Here's why. Cutting through all the B.S., what you suggest is a simple trade: you bring your looks to the party and I bring my money. Fine, simple. But here's the rub, your looks will fade and my money will likely continue into perpetuity...in fact, it is very likely that my income increases but it is an absolute certainty that you won't be getting any more beautiful!

So, in economic terms you are a depreciating asset and I am an earning asset. Not only are you a depreciating asset, your depreciation accelerates! Let me explain, you're 25 now and will likely stay pretty hot for the next 5 years, but less so each year. Then the fade begins in earnest. By 35 stick a fork in you!

So in Wall Street terms, we would call you a trading position, not a buy and hold...hence the rub...marriage. It doesn't make good business sense to "buy you" (which is what you're asking) so I'd rather lease. In case you think I'm being cruel, I would say the following. If my money were to go away, so would you, so when your beauty fades I need an out. It's as simple as that. So a deal that makes sense is dating, not marriage.

Separately, I was taught early in my career about efficient markets. So, I wonder why a girl as "articulate, classy and spectacularly beautiful" as you has been unable to find your sugar daddy. I find it hard to believe that if you are as gorgeous as you say you are that the $500K hasn't found you, if not only for a tryout.

By the way, you could always find a way to make your own money and then we wouldn't need to have this difficult conversation.

With all that said, I must say you're going about it the right way. Classic "pump and dump."
I hope this is helpful, and if you want to enter into some sort of lease, let me know.