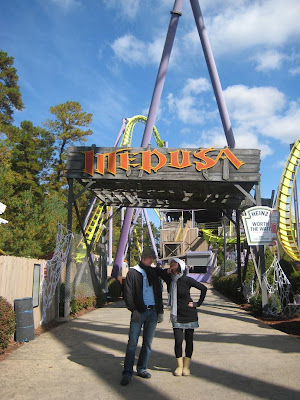 Phipps and I spent Sunday at Six Flags in an effort to preserve our youth. We woke up early, dressed in warm clothes, grabbed bagels and OJ, and were on our way. After a few rides, fatigue hit us and we started to feel...OLD! We were in pain everywhere from head to toe and were eager to sit down at any opportunity. The chitter-chatter from teenagers irritated us and the thought of standing in line for another two hours was no longer fun. We came to the conclusion that we simply outgrew our beloved Six Flags. 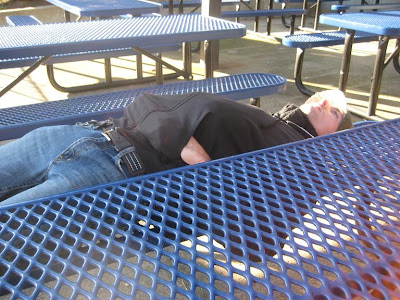 (We were exhausted and needed to take naps)

Six Flags has always brought back fond childhood memories for me --- nostalgia at its best. Growing up as the eldest child with three siblings (all brothers) and traditional Chinese parents was definitely no walk in the park. My brothers and I were expected to help with the family business as soon as we were tall enough to reach over the counter to hand customers their change. And since girls develop quicker than boys, you can only guess who spent most of their childhood helping mom and dad at the shop. That's right, it was none other than yours truly. So when my school planned field trips to Six Flags, it was something I always looked forward to --- no school, no annoying brothers, and no work!

I loved every moment. Staying up the night before contemplating which outfit I would wear and who I would sit with on the bus. Sneaking a can of Coke into my lunch bag when my parents weren't looking. Secretly asking my father for a few dollars for "emergencies," e.g. ice cream, churros, funnel cake, etc. Asking my mother for money would only elicit unnecessary dissertations about how money doesn't grow on trees, blah, blah, blah. Oh, how I envied my peers with parents who handed them a twenty dollar bill to buy lunch and snacks!

All these years I thought I enjoyed Six Flags for the thrills and rides, but in reality that's only part of the reason why it brought back so many fond memories. Six Flags represented freedom. Freedom from my parents, my family obligations, my life at home. Don't get me wrong, I admit to being an adrenaline junkie and I love that empty stomach feeling when plunging down a steep drop on a roller coaster, but looking back at it now, the rides were just the surface because it goes so much deeper than that.

I realized that I never left Six Flags that day, but perhaps it's time to say farewell as I enter a new phase in my life --- a phase that embraces a lifelong partnership with someone who wants to explore a new theme park with rides that have never been ridden before. 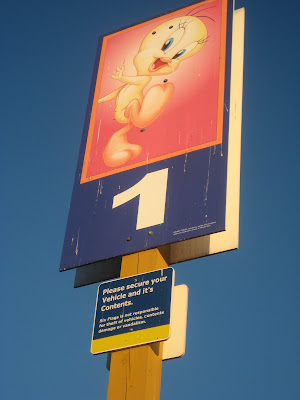 Posted by Kim Hong at 6:02 PM 3 comments: Links to this post 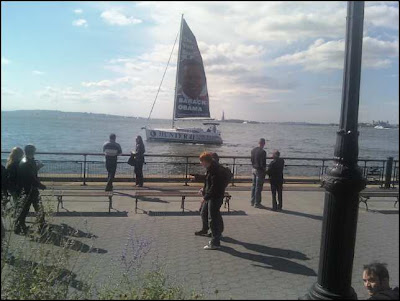 During my pathetic attempt to put in a long run before running the NYC marathon in 14 days and 11 hours, the image of McCain's face on a sailboat lurking along Battery Park forced me to stop. I couldn't believe my eyes. How could anyone get away with this? I decided to take a photo of it on my cell, but by the time I had my phone ready to snap a shot, the sailboat did a 180 degree turn and Obama's face appeared! In only a matter of moments a crowd burst with cameras in hand snapping photos left and right...now that's more like it!

Make sure to check out Politico's Swing State Map featuring the most recent polling average in the most competitive states.
Posted by Kim Hong at 5:54 PM 1 comment: Links to this post

I saw this Holiday Inn commercial the other day and just knew someone would surely post it on YouTube (found it in less than ten seconds). The commercial made me laugh, but better yet, I actually wanted to know which company came up with this funny commercial --- ahhhh...Holiday Inn Express! Well done - congratulations!

Hold on to my clean shirts
And please dont get em dirty
'Cuz I know you're gonna drool
When you hear me getting wordy
'Cuz im a walkin, talkin, smackin human encyclopedia,
You thought I'd stop there?
But now I'm gettin greedier.
I'm a promotion in motion and find out you got the notion
That I got strategic plans comin out my ears,
My key points and decks will bring y'all to tears,
Turnin pennies into dimes
I shift paradigms
Now how you gonna let a marketing rep
rip your rep and slip adept rhyme schemes in
that your mind only dreams in
I bet you're all wondering why my rhyme is so tight...
I did stay at a Holiday Inn Express last night.
Posted by Kim Hong at 6:05 PM 2 comments: Links to this post

While in California, Juan told me and Nick about a LIVE 97.1 FM Broadcast featuring Adam Carolla so we decided to tag along for the mini road trip to LA from SD while listening to podcasts from Juan's favorite stand-up comedian, Mitch Hedberg. (Note: buy Juan a GPS system for Christmas; we got lost and ended up calling friends to mapquest directions while we were on the 405N)

Ahhh...this was a great event for my beau Nick, especially since it was his FIRST time in Los Angeles! I'm sure this was exactly how he imagined a "Hollywood" event; hot blonds (some wore nothing but body paint), celebrities such as Danny Bonaduce from the Partidge Family, former 'N Sync boyband singer Lance Bass, and David Alan Grier, comedian best known for his work on the sketch comedy, In Living Color (Remember "two snaps up!" and "Homey don't play that"?), free promotional cocktails courtesy of Hornitos, and there were even MERMAIDS swimming in the Roosevelt Hotel pool!

Of course we walked down Hollywood Blvd. after the event for some grub. It was a tre fun night! 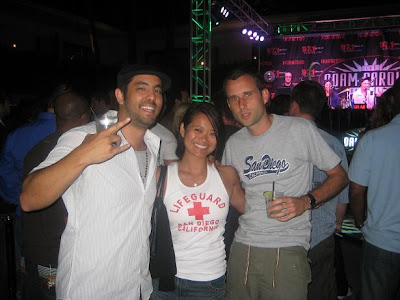 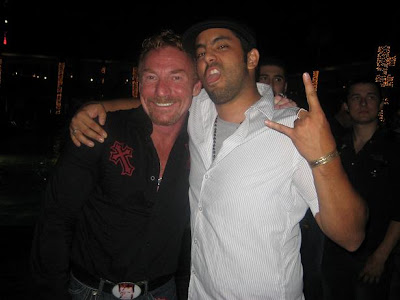 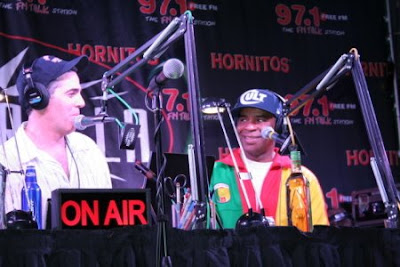 Posted by Kim Hong at 8:43 AM No comments: Links to this post 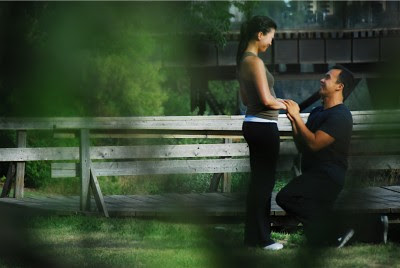 Congratulations to Vu and Monica! These two lovebirds were recently hitched, not once or twice, but THREE times! It wasn't enough to say "I do" in Mexico, so they did it again in San Diego, and then again in Vancouver!

I've known Vu and his family since the early 80s. I have some funny childhood photos of us filed away in a family album somewhere at my parents' home collecting dust...ahhh the good old days! After my family moved to Chula Vista in the 90s, we lost touch during most of our adoloscence, but we reconnected in college and kept in touch since. Thanks to email and MSN messenger, staying in touch was pretty much effortless.

When Vu told me that he had found THE ONE only after dating Monica for three months, I knew he was serious. I never thought of Vu as the "impulsive type," so when he told me he was head over heels for Monica, I knew he had found HER, the woman he would spend the rest of his life with happily ever after.

Words can't really explain how Vu knew Monica was the love of his life, but when he talked about her, you could just sense the sincerity and authenticity of his love for her. Read about how he proposed to Monica here.

Some people believe couples should date for at least a year or two before getting hitched, but can you really put a time schedule on love? I don't think so.

So why the three weddings? She's from Canada, he's from San Diego, and what if the couple wants a destination wedding? How do you decide on the wedding location? Why not have it all and plan three weddings? Talk about over-the-top, but you know what? They pulled it off and made it all look so easy.

Nick and I were honored to attend their special celebration in Mexico. 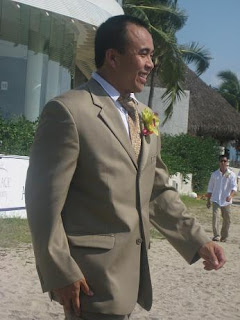 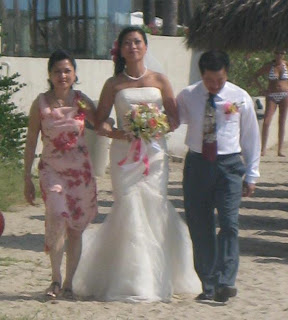 * Do wear khaki or linen pants.
* Do wear sun dresses.
* Do wear sandals/flip flops or shoes with smaller heels. It's difficult to walk on sand with 3-inch heels!
* Do wear sunglasses to protect your eyes.
* Do not wear t-shirts. Wear a button-down shirt.
* Do not wear shorts. Although one or two people will show up in shorts, do YOU want to be that person?
* Remember to bring sunblock. You can be stuck in the sun for a long time before the bride walks down the aisle, so protect yourself!

I have to admit, I felt a little uncomfortable wearing my dress with sandals, so next time I'll wear a long flowy dress that covers my feet entirely.

Here are some cool beach wedding ideas to note:

As we approached the wedding setup on the beach, they handed out these cool sun umbrellas! 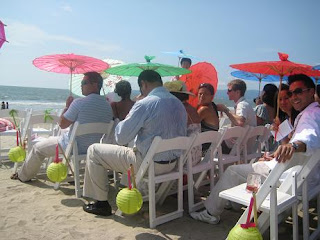 It was HOT, HOT, HOT! Everyone was sweating profusely and fanning themselves with the program, so the resort staff handed out refreshing, cold bottles of water to guests. GREAT IDEA!

The entire ceremony was HEARD. Thanks to the use of a microphone, guests were able to hear every poem, speech and vow -- loud and clear! 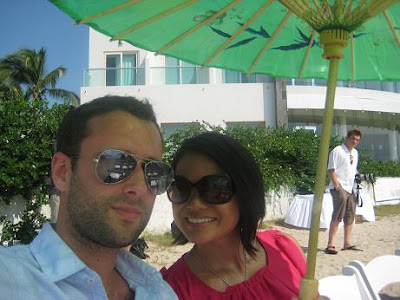 Posted by Kim Hong at 7:30 AM No comments: Links to this post

The Doghouse: Pictures are Worth 1,000 Words 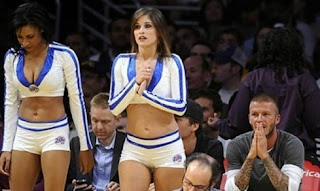 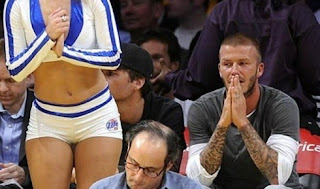 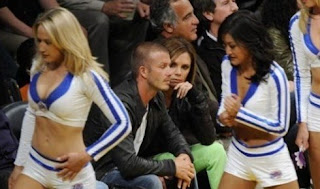 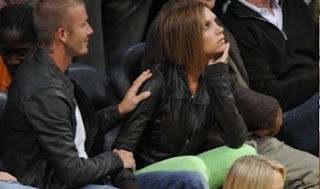 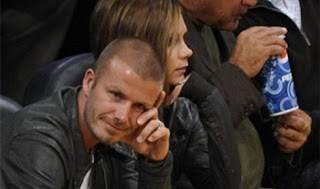 Thank God this NEVER happens to me and Nick! Shame on you David Beckham!!!
Posted by Kim Hong at 6:08 AM No comments: Links to this post