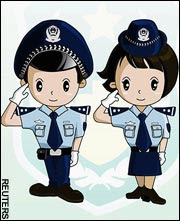 Ahhhh! The Chinese government never ceases to amuse me!

Meet "Jing" and "Cha", China's Internet Police named after the two characters that make up the Chinese word for "police". The cartoon image pops up on computer screens when "criminal activity" takes place on the Internet.

Sounds like a good idea, except when criminal activity doesn't only include fraudulent activity, but also includes freedom of speech. China is best known for censorship and arresting journalists for posting blogs that challenge the political status quo. Microsoft, Yahoo and MSN have all agreed to pull blogs that "disrupt social stability."

All I can say is thank goodness my family left the country decades ago!
Posted by Kim Hong at 6:18 PM