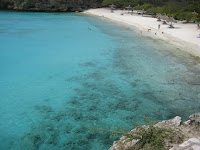 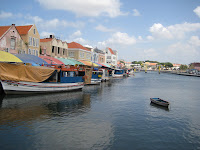 First time in the Caribbean and it's for work! Nevertheless, I had a great time exploring Curacao and learning about the diverse (and somewhat disturbing) history that makes this island so unique. Bon Bini!(means welcome in the native language 'Papiamentu'). The island consists of four languages, Papiamentu, Dutch, English and Spanish. When this island was 'discovered' by the Spaniards in 1499, they quickly realized that there was no gold and terrible for any type of agriculture, so they left. In 1634, the Dutch West India Company decided to utilize the island as a base for its trading empire because of its strategic location and natural harbor. Curacao prospered as a trade center, especially for slavery. In 1854, the Netherlands abolished slavery and the economy of the island collapsed. However, when you visit the island, the history still exists. Dutch-colonial architecture encompasses the island, a melting pot of more than 65 ethnic groups, and the "island time" mentality that everyone goes by, are examples of how the island's past effected the future of the island.

I stayed at Curacao Marriott, which made my trip that much more enjoyable (not only because they are one of my clients, but the customer service and beach access was the best on the island). I was lucky enough to enjoy a sunset boat ride with a very passionate dive master named Tom Zeck. He runs the Caribbean Sea Sports dive center with a fun and dedicated crew.

Upon my return to Curacao, I plan to become dive certified. On my last visit, I was able to get a sneak peek at the marine life at the Seaquarium and a one-hour snorkeling adventure. BTW - I had my first dolphin encounter, which was very cool! It only left me phening for more! I also want to check out the ostrich farm and the Hato Caves!

Until next time...
Posted by Kim at 8:19 PM No comments: Links to this post