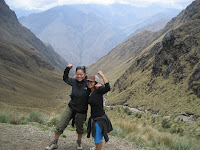 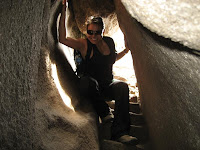 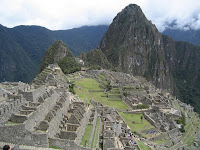 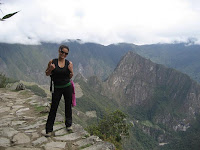 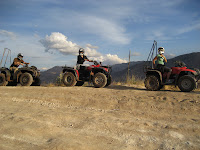 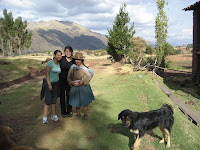 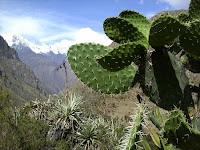 It's been a while since I've visited my very own blog. I can't even remember the last time I was here. So let me get all caught up.

Jhoanne and I traveled to Peru and completed the four day Inca Trail to Machu Picchu! We landed in Cusco and spent a few days getting acclimated to the altitude. We decided to go white water rafting and rode ATV's for the very FIRST time. It was so much fun. And get this, of all places to run into an old high school buddy...I bump into Gabe Patterson from Montgomery High! We were shopping in the flea market and I saw a side-back profile of him and just whispered loud enough so that he could hear me, but not too loud so that it would embarass me if it wasn't him. He turned around and low and behold, it was him! We decided to ride ATV's together later on that day and ended up going out together later that evening. Jhoanne and I convinced him to try the cuy, which is a delicacy in Peru. It is basically guinea pig prepared in a stove oven in its entirety. They don't cut it up or anything, served all in one piece --- check out the pictures on Flickr! Disgusting. I couldn't even stand to watch him eat it. Usually, you get to pick the guinea pig from a bin when it's still alive. Thankfully, we didn't go to a place that had them "fresh" and still breathing. Poor little creatures....

Other than that, Peru was an amazing trip! Jhoanne was the PERFECT travel partner. She can be a morning person when required and she's also a fighter. Although she packed way too much, she managed to survive the trail without me hailing a burro to take her back to the start line. Of course I had to make fun of her for packing heels. She's definitely got a lot more balls than everyone envisioned. We laughed throughout the entire adventure. There were so many bonding moments that I will cherish with me forever and we will definitely have many more trips ahead of us. We were thinking South Africa for 2008...but we'll see what happens.

Also, 2007 was the first time I had ever spent Christmas away from home and boy was it lonely. Flying home for Thanksgiving and not Christmas was a HUGE mistake. I guess I was just really excited to see grandma and grandpa in the U.S. for the very first time. Grandpa fell down the stairs and broke his neck a little before Turkey Day, so I wanted to see him ASAP. I just recently learned that he will be returning to Vietnam at the end of this month. I post-poned my Southeast Asia trip so that I would get to see them in Vietnam...so I think I'll visit in Spring/Summer, depending on my job situation.

Spent New Year's Eve in Miami with Bunmi and NayNay! We had a fun time, except for the alcohol poisoning Bunmi experienced on New Year's Day. We spent the entire day indoors because she was violently ill and throwing up what seemed to be every couple of hours. The weather was pretty crappy as well, but eh, who am I to complain? Atleast I got to see what South Beach was all about, and I'm never going back. I'm way too old for this 'spring break-like' atmosphere.

BTW - I hate it when men wear sun glasses INSIDE clubs or at night.

Miami was full of orange people that were too cool for school. Oh and one more thing, Bones from "I love Miss New York" tried to hit on Bunmi at a bar with the corniest/cheesiest line ever.